Los Angeles, California, April 14, 2007 — "The 'Sweet Swan of Avon' is wearing no feathers!" declared Shakespeare Authorship Coalition (SAC) chairman John M. Shahan, during a signing ceremony for copy #1 in a limited edition of 400 posters of the SAC's Declaration of Reasonable Doubt About the Identity of William Shakespeare. The event, co-sponsored by the SAC, based in Claremont, California, and the LA-based Shakespeare Authorship Roundtable (SAR), took place at UCLA's Geffen Playhouse. Signatories included eight founding SAR members, and two other long-time members. Concordia University hosts a second declaration signing tonight in Portland, Oregon.

Signings are also planned at Brunel University in London (in September), and one on what is being billed as "Doubters' Day in the U.K." on September 8, at a suitable venue in the town of Chichester, following the Matinee performance of former Shakespeare's Globe Artistic Director Mark Rylance's new play on the authorship issue: The Big Secret Live — I am Shakespeare. Authorship doubters everywhere are being urged to see Mark's play, attend the event, and witness the declaration signing.

"Now, anyone who's interested can quickly and easily understand why so many very credible people have expressed doubt that the traditional Shakespeare — Stratford's Mr. William 'Shakspere' (which Shahan pronounced as 'Shack-spur') — was the author," Shahan said. "All one needs to do is read the declaration, which clearly and succinctly lays out the most important evidence and lines of argument in the longstanding controversy. The 'Sweet Swan' has been plucked, and he will never look quite the same to us again" he said, referring to the Stratford man, not the true author, whoever he may have been. To read and sign the declaration, go to the SAC website at: www.DoubtAboutWill.org.

The declaration does not address the question of who the author really was; rather, it addresses the threshold issue in the controversy — whether there is room for "reasonable doubt" that the Stratford man wrote the works. The moderately-worded declaration says "Reasonable people may differ about whether a preponderance of the evidence supports Mr. Shakspere, but it is simply not credible for anyone to claim, in 2007, that there is no room for doubt about the author." It concludes that "the identity of William Shakespeare should, henceforth, be regarded in academia as a legitimate issue for research and publication, and an appropriate topic for instruction and discussion in classrooms." The main objective of the SAC is to legitimize the authorship issue in academia through public education. 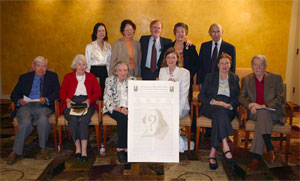 Visit the full gallery of photos from the ceremony.