Contrary views: a debate about the Declaration of Reasonable Doubt 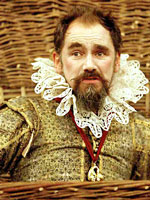 Actor Mark Rylance, Chairman of the Shakespearean Authorship Trust, replies to Prof. Wells' criticisms in a letter to the editor of The Stage magazine

Last year my friend Stanley Wells wrote an article for this journal in which he warned Sir Derek Jacobi and me to beware lest our curiosity for the true identity of the author of the Shakespeare works drive us insane. Stanley holds a number of distinguished academic degrees, he has a CBE, he has published and edited many books on Shakespeare, seen all the plays many times, and sat on boards of The RSC and Shakespeare's Globe, where, for a while, we worked together. He knows how to write a damn good argument.

Stanley is angry because he is totally unconvinced that there is any room for even the slightest doubt that the man from Stratford-upon-Avon wrote the plays attributed to Shakespeare. He is fed up with Sir Derek and me particularly because we have signed the “Declaration of Reasonable Doubt” along with over 1200 others to date, including many academics. This declaration, which Stanley mocks in his article, is the result of a collaborative effort among amateur and professional scholars to clarify why we think there is a reasonable doubt that the actor from Stratford-upon-Avon really wrote the plays attributed specifically to him seven years after his death. We are not insisting that anyone must study this question or, God forbid, change their well-trained minds about any belief or thought they hold precious. We merely want to set the record straight about why some of us have our doubts, and enable a more intelligent discussion for those, like Stanley, who wish to engage with our research.

Putting aside the usual slurs and emotion of Stanley's article, he did actually respond with his own reasons for certainty, which was helpful. [Immediately following this letter] you will find a point by point response to every certainty which Stanley lists in his attempt to prove that there is no doubt about Shakespeare's authorship. You may judge for yourself, if you are interested, how certain this little question of history really is.

Stanley has often shared his praise and despair about the acting in Shakespeare plays with me. He is not an actor, but I value his opinion. I adore good scholarship and he has been a leader during the most wonderful period of editorial work on Shakespeare's texts since they were written. Our play scripts are now packed with information to help us understand and interpret what we are saying. As an editor of the plays, he is an extraordinary scholar, but in the field of authorship studies, I have to say, I think he is blinded by an attachment to the Stratford actor. He cannot maintain his scholastic objectivity. He shouts, calls people names, and in this particular case warns that those who don't agree with him will fall into insanity. Once I even had the historical delight of Stanley pulling me by my beard at the site of The Rose Theatre! But more worrying to me is his tendency to simply ignore evidence if it contradicts his argument. When we meet as friends, and believe me I do respect him very much for what he has done for Shakespeare, I wouldn't dare bring this subject up for fear of his anger. What's it all about? As I'm often told, “surely it's the plays that matter.”

If you are curious about the author of these incredible plays and poems, and not frightened by Stanley's warning of infectious insanity, I recommend that you read a book by Diana Price, Shakespeare's Unorthodox Biography. It is very straightforward and includes all the known details about William Shakespeare's life that the orthodox biographers omit in order to make their case. I have not yet heard or read any response that answers the many fascinating doubts it raises.

Lastly to my fellow actors I say, scholars never have to stand up in front of anyone and do more than EXPLAIN WHAT someone in Shakespeare is speaking. We actors have to stand up and BE WHY someone in Shakespeare is speaking. We shouldn't allow ourselves to be bullied out of a natural curiosity about an author's true intentions if it assists us in our craft of playing a character's true intentions.